ON-LINE: Slaughtering the Scapegoats: The Mass Murder of Jews and Roma in Hungary in 1944-45 (László Csősz) Copy 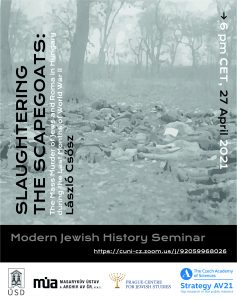 László Csősz (Institute of Contemporary History, Czech Academy of Sciences)
In Hungarian historical awareness, wartime genocide is closely linked to the German occupation, which began in March 1944. ‘Germanizing’ the national tragedy in this way minimizes Hungarian responsibility and the role of domestic xenophobic traditions in the Holocaust. The dimension of mass destruction in Auschwitz and other Nazi camps somehow overshadows other crimes against humanity that were perpetrated solely by Hungarian actors.
This lecture provides a comparative overview of the mass executions and other atrocities committed in the Hungarian provinces from early autumn 1944 to early spring 1945, in which thousands of Jews and hundreds of Roma were killed. The lecture analyses the historical context, the social dynamics, and local factors of the ‘cumulative barbarization’ that resulted in the murder of entire communities, the motivations of perpetrators, the post-war retribution, and the place of the events and the killing sites in the collective memory and remembrance of the Holocaust in Hungary.
https://www.facebook.com/events/464744211514421
Zveřejněno 22. 4. 2021 אירועים
Úvod > אירועים > ON-LINE: Slaughtering the Scapegoats: The Mass Murder of Jews and Roma in Hungary in 1944-45 (László Csősz) Copy