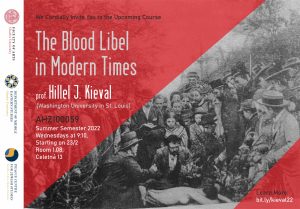 Hillel J. Kieval is the Gloria M. Goldstein Professor of Jewish History and Thought at Washington University in St. Louis. A historian of Jewish culture and society in Central and Eastern Europe in the 19th and 20th centuries, his research interests range widely: from pathways of Jewish acculturation and integration to the impact of nationalism and ethnic conflict on modern Jewish identities; from cross-cultural conflicts and misunderstandings to the discursive practices of modern antisemitism; and from theories of Jewish citizenship to the phenomenology of "ritual murder" trials at the turn of the 20th century. Among his numerous books and articles are The Making of Czech Jewry: National Conflict and Jewish Society in Bohemia, 1870-1918 (1988); Languages of Community: The Jewish Experience in the Czech Lands (2000); and, forthcoming, Blood Inscriptions: Science, Modernity, and Ritual Murder in Fin de Siècle Europe.

The popular belief that Jews, individually or collectively, conspired to kidnap and murder Christian children in the enactment of Jewish religious ritual—also known as the blood libel—first emerged in Europe in the 12th and 13th centuries.  In Central Europe (the Holy Roman Empire), ritual murder accusations reached a high point in the fifteenth and early sixteenth centuries, while in Poland-Lithuania, blood libels rose sharply with the introduction of the Counter-Reformation in the 1560s, declining, and finally ending in the 18th century. Meanwhile, on the level of high culture, this understanding of Jewish criminality and danger was increasingly relegated to the categories of superstition and folk belief.  States declined to prosecute cases of so-called “ritual murder” for over two hundred years.

At the turn of the nineteenth and twentieth centuries, however, hundreds of accusations of Jewish ritual murder were reported in the Central European press. Remarkably, four Central and East European states (Germany, Austria, Hungary, and Russia) now chose to break with the long-standing tradition of skeptical neutrality and to prosecute Jewish defendants at six public trials: Kutaisi (Russian Georgia, 1879); Tiszaeszlár (Hungary, 1882-1883); Xanten (Germany, 1891-1892); Polná (Bohemian Lands, 1899-1900); Konitz (Germany/today Poland, 1900-1902); and Kiev (Russia/today Ukraine, 1911-1913).  One of the main goals of this course will be to understand what made these ritual murder trials possible.  How did they work?  What relationship did they have to modern antisemitism? And how did these criminal proceedings comply with or violate contemporary scientific methods and procedures?  Finally, we shall trace the afterlife of the ritual murder accusation from the 20th century to our own times.

Students must be able to read English, and to speak and understand spoken English. Prior knowledge of Jewish history is also not required, but would be advantageous.